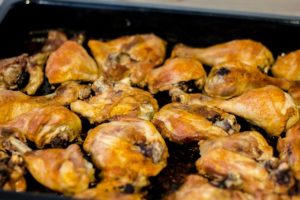 It really is too bad, not to mention totally unfair, that it seems to be a rule of the universe that those things we love the most are so often the worst for us. Not everything, of course. Puppies, walks on the beach, clean sheets on the bed. These are all wonderful and, shoes that are mistaken for chew toys aside, positive additions to our lives. This is not the case when it comes to fried chicken, greasy burgers, French fries, chicken tenders, mozzarella sticks, hush puppies, egg rolls and, well, you get the picture.

We love fried food, and it is bad for us in so many ways. Fried foods are known to be prime contributors to obesity, high blood pressure, and high cholesterol and lead to Type 2 diabetes and heart disease. Researchers from the Harvard School of Public Health conducted a study of more than 100,000 men and women over about a period of 25 years and found that those eating fried food 4 to 6 times per week were 39% more likely to develop diabetes than those who ate fried foods less than once per week. The risk increased as the frequency of eating foods that were fried increased.

Here in the U.S., it seems like we fry everything and that there is a fast food restaurant on every corner. That may be true, but we certainly didn’t invent the idea of frying food in hot oil. The ancient Egyptians did that about 7,000 years ago. The Romans were frying chicken in the 1400s, and, by the 1600s, the Japanese were doing tempura. They may or may not have realized how unhealthy this type of cooking is, but we have no excuse: we know how important it is to switch to other methods.

We have actually known for quite some time that our health would benefit by eliminating or at least cutting down on fried foods. Unfortunately, that has not been as easy as it should be. One reason is that we are conditioned to grabbing lunch or dinner on the fly, which usually means fast food and, more often than not, something fried. Perhaps even more of a factor, though, is that we grew up on fried food, and we just really like the way it tastes. Finding replacements that satisfy us, in the same way, is a challenge. Nevertheless, there are some good alternatives and three of the most popular are:

Baking or Broiling – baking and broiling are one of the popular alternative methods of frying. More and more innovative recipes are being developed all the time to closer approximate the taste and “crunch” of frying.

Sautéing and Stir-Frying –  even though these words sometimes are used to describe the same thing, they are indeed two different things. Sautéing involves cooking meats and/or vegetables in a pan over a high heat. The pan is usually lubricated with either oil, chicken broth or water. It’s a go-to for many because it’s quick, easy and can be flavorful. Stir-Frying is very similar in the sense that you are cooking meat and veggies on high heat in a pan, however, the heat is usually much higher. This requires constant stirring of the food so it doesn’t burn to the side of the pan.

Air Fryers – the latest rage on social media, air fryers can give you the crispiness you desire from using a normal fryer without having to dip it in oil first. Air fryers work my spinning hot air around the food causing the outer layer to carmelize causing that crunchy, crispiness that you often associate with fried foods.