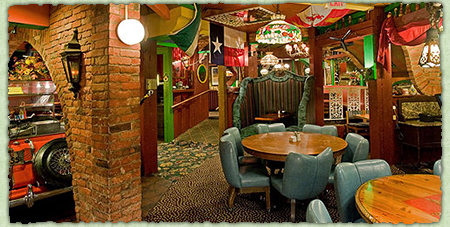 One of the things that I pride myself on is trying restaurants all over the country. I am usually very good at researching restaurants and finding the hidden gems or the highest rated 5-star restaurants. But occasionally, there’s a cosmic gaff and I end up falling for the dreaded tourist trap. What is a tourist trap? According to Wikipedia, a tourist trap is a form of entertainment whose sole purpose it to garner the attention of out of towners or tourists. And that’s exactly what Magic Time Machine is in San Antonio, Texas.

As someone from New York City, I am no stranger when it comes to being entertained while eating. Ellen’s Stardust Diner is the epitome of a tourist trap in NYC. And I walked right into San Antonio’s equivalent. Magic Time Machine’s unique selling point is the fact that you are served by iconic celebrities from yesteryear or famous characters. There are several different rooms with different themes. And depending on where you sit, will depend on who might be serving you. Luckily for me, we sat at the Sweethearts table and had Rapunzel as our waitress.

Unlike Ellen’s where they at least sing show tunes, the waitress’s requirements were to only act like the character. She did the best she could, but since we went on a Sunday afternoon, the restaurant was jammed pack with children and we barely saw her throughout the night. The entire point of the restaurant is to interact with the characters.

Magic Time Machine has several locations but the one in San Antonio seems like it hasn’t been updated in about 20 years. And not in the sense that the pop culture was outdated, but in the sense that perhaps they haven’t cleaned this place since 1990. The decor was retro in the sense that it was actually used back in the day. Everything needs a serious cleaning as the smell of mildew and dust makes the salad bar not so appealing. Nevermind the brown lettuce in the salad bar.

Now that I am done picking apart the decor and service, let’s talk about the most important part; the meal. Based on the reviews that I read online, I had to get the prime rib. To those people, I ask them: Why? This is Texas! I expect my meat and potatoes to be a little bit better than what was served. For $29.99 I got a 16 oz prime rib, mashed potatoes and I splurged and spent 3 extra dollars on mushrooms and onions. The potatoes and mushrooms and onions were cold. The steak was way overcooked. Everybody knows that medium rare is standard. My medium rare was a medium well. And I hate overcooked meat.

Moral of the story: If you are traveling to San Antonio, please do not bother to come here. You will pay way too much money for mediocre food and bad service, just to see waiters dres up in costume. Do yourself a favor and go to Chili’s across the loop. At least they don’t overcook their steak!